Dogs Are Unhappy in Apartments.

The size of a home has nothing to do with the welfare of a dog. If it fills its needs, it will be happy. To achieve this, you must offer your dog a quiet place where it can sleep in peace and be given food in sufficient quantity and quality (not too much!). A dog must also have fresh water and be physically active every day. On this issue, the needs vary according to each race, but most dogs need at least one hour of daily exercise. They also need to be stimulated mentally, allowed a certain routine and given affection.

If my dog ​​refuses to eat its food, it is because it does not like me.

In my experience, most dogs who shun their food are given treats or are overfed. Moreover, studies suggest that between 45% to 55% of North American dogs are obese. A healthy adult dog can fast for a week without its health being jeopardized. Of course, one should never deprive them of food for days. That being said, if your dog does not eat its food, but it nevertheless displays a resplendent form, remove the treats and wait. It will eventually eat again when it is hungry.

My Dog ​​Is Dominant.

Most dog owners have a wrong perception of dominance. According to scientists, this attitude is to use force to gain access to resources. For example, a dominant wolf does so in the presence of other males who covet a female. It could also adopt this behaviour to reach a place to sleep or to get food and water.

Dominance is not a trait of character. As evidence, three alpha wolves meeting within packs, one will remain dominant. Others will submit to him. For this to happen, two individuals (or more) are eyeing the same resource. Unless you challenge your dog to reach its food, or if you put it in competition with other males for a female, this will not happen.

At the very least, know that it will not be dominant with you. If he growls when you approach his bowl, it is best to hire a qualified dog trainer to solve this problem.

I must dominate my dog ​​to prevent potential behaviour problems. 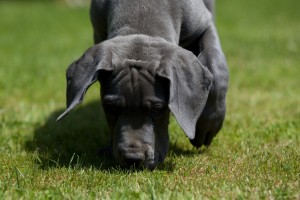 Many people think they have to use force to educate their dog. Yet, studies have shown that punitive methods, which include, among others, hitting a dog,  using a choke collar or a shock collar generate anxiety in animals. While punishing your dog, you send out the signal that it made a mistake. In so doing, you do not tell it what to do to overcome its misconduct. The dog does not understand what you expect of him, so it will perceive its environment as unpredictable. This could create health-related issues and misbehaviour (e.g. Excessive barking, destruction, dirt, aggression and self-injury).

A Dog Growling Is an Aggressive Dog.

Nothing is more wrong! Growling is the normal behaviour in a dog. Moreover, this form of communication is particularly effective because almost everybody reacts in such situations. The dog growls to express fear or discomfort. In so doing, it requests to put an end to this behaviour and move away.

I have to punish my dog when it ​​growls for fear that it will become aggressive.

Punishing a dog that growls is telling it to stop communicating without teaching it to appreciate the situation that makes it uncomfortable. Your dog will growl more, certainly, but the next time it will relive a situation where it will feel discomfort, it will attack without warning. The next time your dog will growl, keep it away from what scares it and tell it to thank you for having warned you.

No dog is bad! It is how it is trained that makes a difference. If it has been well socialized during its first months of existence, it will be soft and balanced. Contrary to popular belief, Pitbulls do not have a jaw stronger than their peers. In fact, the German Shepherd is the strongest in this area. And the jaws of a Pitbull will not lock.

Pitbulls got this bad reputation in the early ’90s. Before, they were considered good family dogs. One of them was even the star of a television series called The Little Rascals. Buster Brown, the manufacturer of shoes for children even used a Pitbull as a mascot.  Sadly, the growth of street gangs, in recent years, has dealt them a blow, due to an increase in dog fights, Pitbulls being the main actors.