By Daniel Filion
Consultant in feline behavior at Éduchateur

April 15 2016 – Most cats like to play. In an ideal world, they should play at least twice a day for a total of about 10 to 20 minutes per episode, depending on whether it is a kitten or an adult cat.

Domestic cats have two options for having fun inside: do it alone or with someone. In the first scenario, they have fun with the toys they have at their disposal, like mice they may find under the armchairs or even under the fridge. In the second situation, they will play interactively.

That being said, be aware that playing alone should not exclude the interactive approach. In other words, one does not go without the other. In this regard, I often make the following analogy: the animal that plays alone is equivalent to us humans going bowling or playing pool without a partner. Physical activity is very moderate, so much so that a cat does not spend a lot of energy.

In contrast, an interactive play time demands of the cat to be more dynamic, and it requires more physical effort on its part. One could compare this level of intensity to the energy it takes to play hockey or soccer. Like leopards, cats are sprinters, they can run quickly, but for a short distance.

How to Play With a Cat

A play technique is recommended for cats. It comes in three stages. At Éduchateur, we set it out in our conferences. First, we must allow it, at least once out of three, to catch the prey it covets. Consequently, you will reproduce the reality it would put up with, if it were in nature and like any respectable feline. Knowing that its toy is not infallible, the animal will provide the impulses needed to grab it.

Many people never give their animal the opportunity of winning. This is a mistake, because it will eventually get tired after a while. It is therefore not surprising that in the end, it did not respond to invitations to play with a stick to which is attached an insect.

The animal may even manifest what is known as “redirected aggression”. This sometimes happens when a person uses more or less recommended accessories, including laser pointer. Before its inability to neutralize the spot, which is often too fast, it could experience some frustration and bite someone later.

Second, when the cat catches the prey, vary the movements of the toy whether moving it or immobilizing it. When the object (in this case a fake insect) is inert, very often, the cat will raise its paw to see if it killed its victim. That’s when you should breathe life into it, so that the play will resume more vigorously. 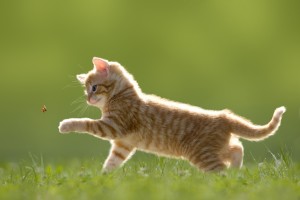 Third, be intense at the beginning of a session devoted to the game, but slow down the pace towards the end. This will result in a scenario that could not be more logical, namely that after several minutes of unbridled hunting, the prey will be much less vigorous than it was initially. You will teach your cat to calm down and curb its enthusiasm.

By repeating the ritual of the game every day, you will fill in its hunting instincts. Remember that hypo-stimulant medium can be very annoying for your cat. Be aware that it will be happier if you keep it busy.

In my next column, I will address in particular the issue of toys that cats prefer.